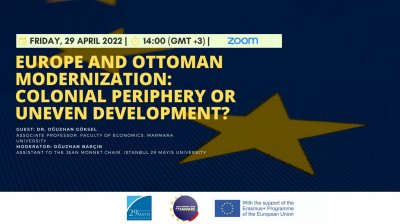 Jean Monnet Chair on EU Awareness, Relations and Cooperation cordially invites you to a seminar on Friday, 29 April 2022:

This Jean Monnet Chair COAWARE event will be a webinar with Dr Oğuzhan Göksel from Marmara University. This seminar discusses the substantial impact of Europe on the modernization trajectory of Ottoman Empire after the Tanzimat Reform of 1839.

There are various views within the existing scholarly literature on the exact nature of the political, economic and cultural relations between the then rapidly declining/disintegrating Ottoman Empire and major European powers of the 19th century such as Britain, France, Russia, Austria-Hungary and later, Germany and Italy.

While some scholars believe that the Ottoman Empire gradually became a quasi-colony of European powers – in other words a periphery in the famous ''world-system framework'' of Immanuel Wallerstein – there are other experts arguing that Ottoman encounters with Europe before and after the turning point of Tanzimat resembled a case of ''uneven and combined development'' where a technologically backward country start to model its institutional, economic and cultural systems based on the model of more advanced powers, eventually benefiting from this relationship albeit the results may be uneven and unexpected rather than conforming to the Western model.

This seminar will discuss the validities of these contrasting positions and attempt to comprehend the modernization experience of Ottoman Empire within the context of the late development of similar non-Western societies across the world. Our focus will also be on how various groups of Ottoman/Turkish intellectuals reacted to Europe’s intense influence, the Tanzimat Period sowing the seeds of Türkiye ‘‘love-hate relationship" with the West.

This event will be chaired by Oğuzhan Barçın, Assistant to the Jean Monnet Chair. The working language will be English, with no translation. This guest lecture will be held on Zoom, and the Zoom link will be sent prior to the meeting.

Thank you for your consideration and participation.